Makati, Philippines – Within the solemn Eucharist, marking the 50th year of the SSP Makati (Philippines community), the First Profession of the Vows of Conjugal Chastity, Poverty and Obedience of the first members of the Institute of the Holy Family (ISF) in the Philippines took place at the Sanctuary of St Paul on 30 June 2010. With their respective families acting as witness, those who made their first profesison were: Matea O. Benavides, Carmela G. Estrada, Agnes C.Haw, Lourdes M. Ocampo, and Linda M. Valeza. These pioneer ISF members in the Philippines and Macau started their formation under Fr Celso Godilano, SSP, who put up the first meetings for the establishment of the ISF in February 2006. When Fr Godilano was made Regional Delegate to the SSP England-Ireland Region, the group continued through the two-yearnovitiate program with Fr Domie Guzman as formator.

The Most Reverend Luis Antonio Tagle, DD, Ordinary of the Diocese of Imus, presided over the memorable Eucharist. Concelebrating were the Most Reverend Federico Escaler, SJ, DD, Bishop Emeritus of Ipil in Zamboanga, Fr. Ruben Areño, SSP Philippines Provincial; Fr Cris Robert Cellan, SSP Local Superior of Makati; Fr. Dante Lumabas, SSP Provincial Delegate for the Aggregated Institutes; and Fr Domie Guzman, SSP Formator for the Institute of the Holy Family. Other Pauline priests as well as priests-friends from the Archdiocese of Manila also joined in offering the Holy Eucharist.

During the Rite of Religious Profession for the ISF, Fr Cris Cellan acted as witness in the name of the congregation. Fr Areño presided over the nterrogation and pronouncement of vows. He also gave the ISF members the insignia of the Pauline Family.

ISF is formed by lay persons in family and married life — either as couples, or as single/solo parents — is one of four Vatican-approved international secular institutes founded by Blessed James Alberione as aggregated to the Society of St Paul. The other three institutes are: Institute of Jesus the Priest (IGS), Institute of Our Lady of the Annunciation (IMSA) and Institute of St. Gabriel, the Archangel (ISGA). In a sense, we can refer to these four institutes as “modern versions of a third order” founded by Blessed James Alberione.

The program of the day, as it had been planned and coordinated by a committee led by Fr Rey Reyes, was capped by an agape for all at the Don Zanoni Covered Court. 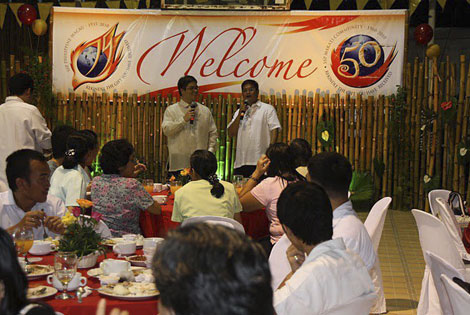